November 26, 2013 – We are pleased to announce that The Belden Brick Company has been awarded the HNA Hardscape Project Award for the Smothers Park and Riverfront Crossing projects in Owensboro, KY 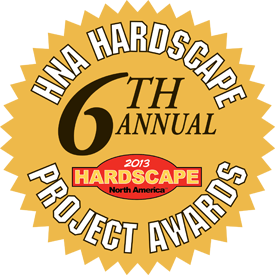 HNA Hardscape Project Awards "On behalf of the entire team at HNA, I would like to congratulate The Belden Brick Company on winning an HNA Hardscape Project award for 2013," said Charles McGrath, ICPI Executive Director. "There were some excellent projects nominated in this category, and the fact that The Belden Brick Company was chosen shows that they truly recognize the importance of quality construction and craftsmanship." The HNA Hardscape Project Awards are produced by the Interlocking Concrete Pavement Institute and supported by the National Concrete Masonry Association and the Brick Industry Association. This year, Belgard and Ewing Hardscapes sponsored the program.

"It's an honor to receive this prestigious award which further endorses The Belden Brick Company's dedication to customer satisfaction and quality brick," said Marketing Director Brian Belden. "I am very proud of everything we have achieved at The Belden Brick Company, and receiving this recognition from the segmental concrete pavement industry is a very significant indication of our dedication to providing construction innovation and excellence to our customers."

The Belden Brick Company is the sixth largest (by production volume) manufacturer in the US brick industry and the largest family-owned and managed brick company in the United States.

WARNING: This product can expose you to respirable crystalline silica, a chemical known to the State of California to cause cancer and reproductive harm. For more information go to: www.P65Warnings.ca.gov.